A bullet proof vest is not designed to protect against any bullet, and body armor is available at different levels of protection. These levels are standardised by many different agencies, but the two most important are the US National Institute of Justice (NIJ) and the UK Centre for Applied Science and Technology (CAST, formerly HOSDB). These are widely held to be the world leaders in bullet and stab testing respectively, and the methods of testing are regularly shared between the two. This means that armor that meets the standard of one institution will meet the requirements of its equivalent. 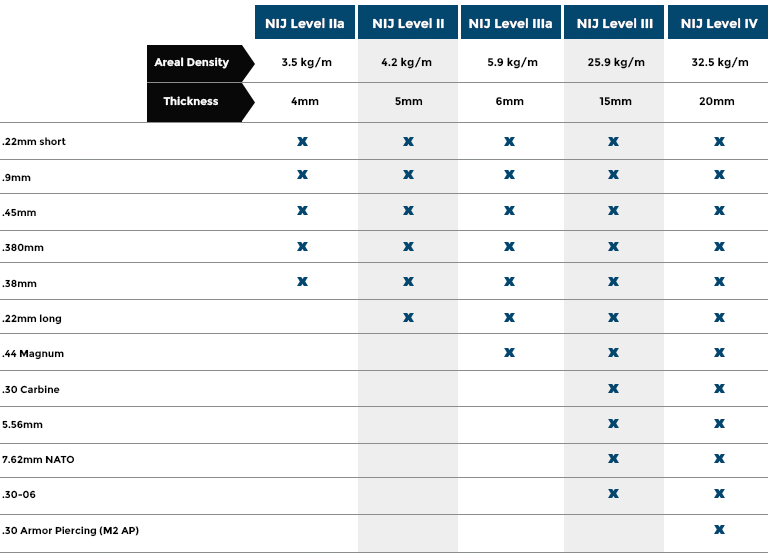 Stab proof vests are standardized by CAST, and have their own levels of protection. While the materials involved in a bullet and stab proof vest are developed in the same way, and will likely use Kevlar, a stab proof vest requires a much tighter weave and the addition of materials like chainmail or laminate to be effective. Multi-threat vests are available that can protect against ballistics and knives for example, but will still need to be graded according to the levels outlined above and below:

Neither a bullet proof nor stab proof vest is equipped to protect against spiked weapons, which are covered by their own levels of protection. Spike protection was first introduced into testing and standards to address the additional threat faced by Prison Officers. Spike protection can be added to stab and bullet proof vests in the form of a laminate coating, but it is important to make sure it adheres to proper testing. The threat levels for spike proof vests are as follows:

View all Products in this Category
Request a Callback
0